The Cat Ate My Gymsuit, by Paula Danziger 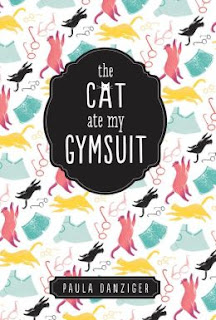 The main character of Paula Danziger’s The Cat Ate My Gymsuit is a 13-year-old girl named Marcy Lewis. The book is in first-person point-of-view, and Marcy is the narrator and the protagonist. She is a shy, go-along-with-the-crowd person, and doesn’t have a lot of self-confidence mostly because of her weight:

She really only has one friend. Her name is Nancy Sheridan. Nancy is really beautiful and popular. She also gets detention a lot. Nancy drives Marcy crazy whenever she writes her a note because she signs her name “Nanci” instead of “Nancy,” and she also dots the i with a “big dumb circle.” To Marcy, the dot looks too much like a blimp. Nancy’s mother and Marcy’s mother are friends. Marcy says, “I always figured that Mrs. Sheridan made her talk to me: Beauty and the Blimp.” In the beginning, it started out that way, but as Nancy got to know Marcy a bit more, she really grew to like her. Now, they’re best friends.

Marcy gets good grades in everything but gym, for she hates changing into a gymsuit. She would just sit there and watch whatever the gym class was doing. When the gym teacher would ask her why she had no clothes to change into, she would just make up an excuse (like “The cat ate my gymsuit”).

Marcy has an excellent and interesting new English teacher named Ms. Finney. Ms. Finney is not a traditional teacher. She says that she likes to try to teach in ways that “interest and excite students.” There are clues that many of the other teachers don’t like Ms. Finney. Marcy and the other students continually ask the other teachers to be more like her, but they just get disgusted at the students when they ask this. Marcy likes Ms. Finney because she makes English class fun:

“Certain things were always the same. Every Monday we had to hand in compositions. Wednesday we took our spelling tests, and then there were the 'Finney Friday Flicks.' We could bring in popcorn while we watched the movies. After seeing the films, we discussed them.”

Ms. Finney starts a club called Smedley, which focuses on group-dynamics. The students wanted to do it in class, but there wasn’t enough time because Ms. Finney has to teach what was in the syllabus. In Smedley, Marcy, Nancy, a boy named Joel (whom Marcy likes), and twenty-two other kids meet after school with Ms. Finney and talk about their feelings. Marcy “should have guessed that Smedley and Ms. Finney were too good to last.” The principal, Mr. Stone, doesn’t like Ms. Finney, and he fires her.

Marcy’s new friend Joel’s father is on the Board of Education, so Joel is able to find out what has happened. She was fired because she refused to say the Pledge of Allegiance. Ms. Finney believes that this country does not truly “offer liberty and justice for all.” Marcy, Nancy, Joel, and a bunch of other kids decide to protest Mr. Stone firing Ms. Finney. This gets them called to the principal’s office and suspended.

Things are going really badly at her house as well. Her dad has a horrible temper, so he’s pretty much like a bomb, only easier to set off. Marcy’s dad is always saying mean things to her, like “Why do I have to have a daughter who is so stupid and so fat? I’ll never get you married off.” When Marcy’s mother decides to support Marcy on her decision to try and help Ms. Finney, Marcy’s father (who hates Ms. Finney) fights with Marcy’s mom, telling her that her place is in the house and not being political. He calls Ms. Finney a “radical.”

What happens to Ms. Finney at her hearing? What happens to Marcy and her friends? Do Marcy and Joel start dating? And how does life in the Lewis house change as a result of the Finney case? Marcy’s mom has found her independence; before this case, according to Marcy’s father, her parents never disagreed on anything. (I think that this is because the father behaves so outrageously that he probably made all the decisions and the mother just went along with them instead of arguing about it). But now, her mother is a lot stronger and making her own decisions. She is not meek anymore.

Marcy has also changed at the end: “I no longer think I’m a blimp. Now I think I’m a helium balloon,” she jokes. She’s also seeing a psychologist, and still hates Mr. Stone. (“I’d throw up on his head if I were tall enough.”) But she is more of a leader than a follower, and she too is stronger, more independent, more outspoken, more courageous, and less meek.

This novel teaches self-confidence. Both Marcy and her mother become more independent and confident, and we can learn from them. Ms. Finney encourages, listens to, and in general understands Marcy. She makes Marcy feel like she knows a lot, and that she's special and important. All you kids who hate school, you never know when an amazing teacher might come along and change your life.

Daddy's afterthoughts: This was one of my favorite books when I was a tween (which was back before the word "tween" even existed, I think). I've heard some people say that "boys won't like it because the protagonist is a girl," but that's nonsense. This book was one of the things that made me want to become a teacher. And I think that any kid who is not at the epicenter of the "in-crowd" will get Marcy and the way she feels. (Teachers may also enjoy the book, which does not cast educational administration is the best light, and I'm a sucker for any book or movie where the teacher is a hero-type character.)
at April 17, 2017