The Giraffe and the Pelly and Me, by Roald Dahl 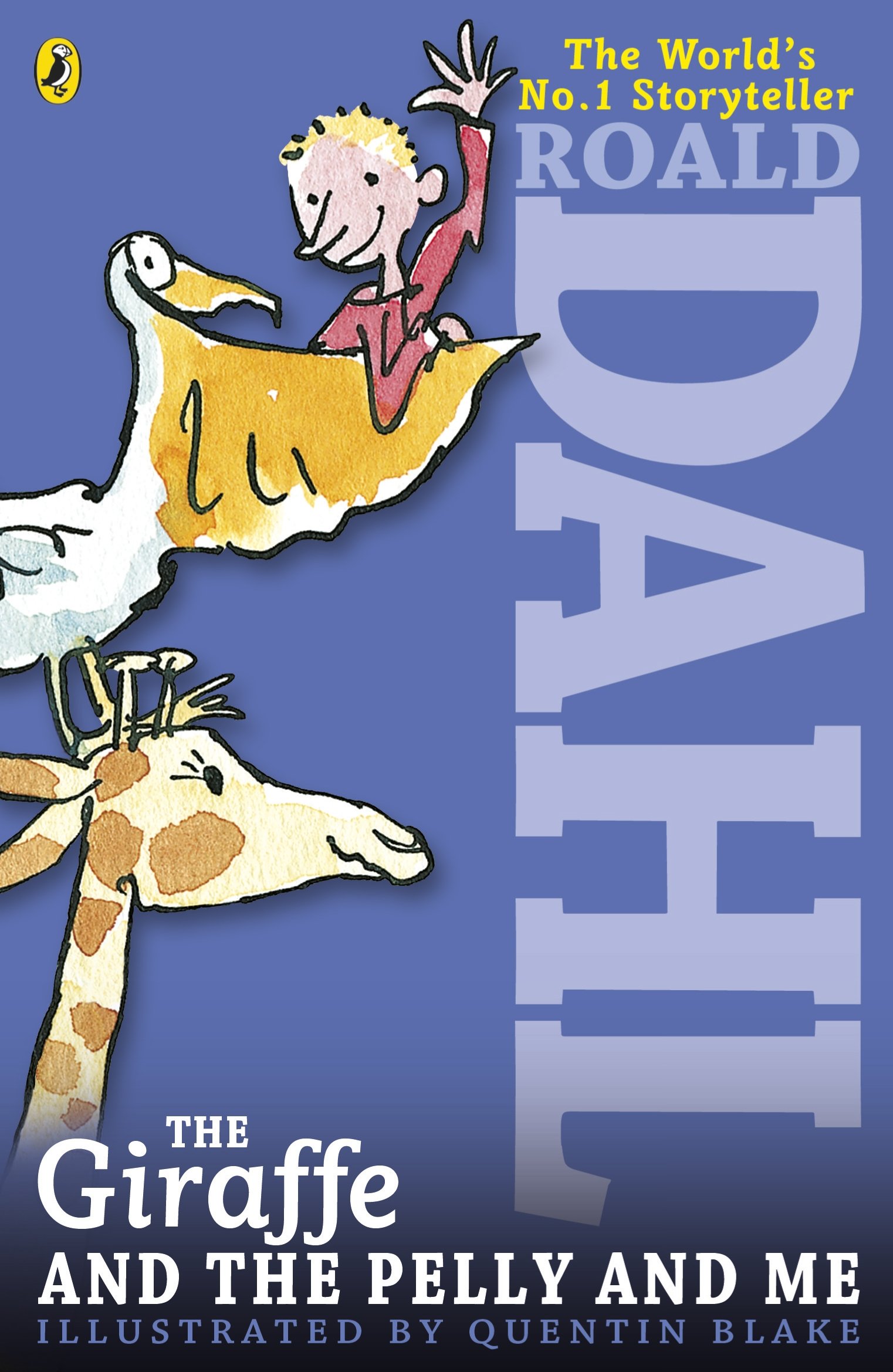 The Giraffe And The Pelly And Me by Roald Dahl (Yes, the Charlie and the Chocolate Factory Roald Dahl) is a hilarious and short book about a Giraffe, a Pelican, a Monkey, The Duke of Hampshire, and a young boy named Billy, the narrator of this story.

Billy dreams of owning a marvelous sweet-shop. There is an old building by his house called "The Grubber", with the words FOR SAIL on the window. (In the old days, a grubber was a name for a sweet-shop.) Billy wants to turn it back into a wonderful sweet-shop again. One day, Billy sees that the words FOR SAIL have been scraped away and in its place someone has painted SOLED. Then pieces of the inside of the building start flying out the window, as if someone were inside the building, ripping things apart and chucking them out.

The next morning, Billy is back at "The Grubber" and the first thing he notices is a new door. It would be really hard not to spot it because it was a.) red, and b.) twice as tall as the old one. The writing on the window has changed yet again, and this time it said:

The Ladderless
Window-Cleaning
Company ~
Get your windows
cleaned without
a lot of dirty
ladders leaning
against your
house.

Suddenly, a strange head appears out of a window on the top floor. Billy had no idea who or what it belonged to, at first. Then another window opened and a Pelican landed on the windowsill! The Pelican ("the Pelly") introduces Billy to the Giraffe, the owner of the head he saw. Then, on the first floor, another window flings open and a monkey pops out!

They are the window cleaners, and each of them can do a special thing. Pelican can retract the top of his beak and turn his lower beak into a huge bucket (for water) without his top beak getting in the way. See the picture above! Giraffe can stretch her neck to an amazing height (like a ladder), and Monkey can climb up her neck (like climbing a tree) to wash windows on the upper floors of a building.

Oh, and all three of the animals can talk.

After a little chit-chat, the window cleaners receive a letter from The Duke of Hampshire, the richest man in England, asking them to clean all 677 windows of his house. So in a short while, they arrive at the Hampshire House (Billy has to show them the way there.) Billy and the window-cleaners introduce themselves to The Duke of Hampshire. The animals appoint Billy as their official business manager (they don't know any other humans) and they get to work.

Is the Duke of Hampshire freaked out by the fact that his window-washers are talking animals? How long does it take to clean 677 windows? Does Billy ever get to own the sweet-shop that he's dreamed of for so long? (Managing a window-washing company is an odd career choice...) And what is Roald Dahl's favorite smell? (Answer: Bacon frying. Yes, it's in the book...)

This book is great for anyone who loves a short, funny story that never gets boring. The book is only around 70 pages, and has loads of illustrations that made the reading even more fun. I hope that everyone who reads this book loves it. And be sure to check out all the other books by Roald Dahl!

Daddy's afterthoughts:  Some parents may be worried by Dahl's reputation as being antisemitic in his personal views, but I don't know if that should color anyone's consumption of or enjoyment of his works of fiction, and I don't see that it actually affected his writing. (But where parents are making choices for their children, forewarned is forearmed, and trigger warnings are all the rage these days.) All that said, this is a deliriously silly and wonderful book, and I just recently learned that there is an audiobook out there voiced by none other then Hugh Laurie (of House fame)!!! Hear a snippet here.

The Girl Who Could Fly, by Victoria Forester

The Girl Who Could Fly by Victoria Forester is about a 9-year-old girl named Piper McCloud who was born with a natural ability to float. Piper lives on a small farm with her ma and pa in a small town called Lowland County. Piper is sitting in a tree observing a robin's nest, when the mother robin pushes one of her babies out of the nest. But before hitting the ground, the baby bird starts to fly. Piper decides that she should learn how to fly too. She teaches herself how to fly by:


Piper's flying attracts the attention of Dr. Letitia Hellion, director of an institute called I.N.S.A.N.E., and she asks Piper if she would like to come to the institute. She says that at the institute, Piper will be protected from other people who would want to "get" at her, or hurt her in some way, because they may think she is dangerous. Piper and her parents agree, believing going to the Institute would be for Piper's own good.

Once at the site, Piper meets the 13 other residents, all with special "talents" like hers. For example, two of the residents, the Mustafa twins, can control the weather. Also, there's Lily Yakimoto, who is telekinetic. Another girl can control electricity, and there is a boy with X-ray vision. Eventually, she befriends Conrad who is extraordinarily smart. He has figured out how to time travel, and he is “15 times smarter than Einstein.” He claims to know the true nature of I.N.S.A.N.E., and if he's right, it isn't good.

This picturesque story will grab every ounce of your attention and will not let go until you've flipped the last page.

Every Thing on It, by Shel Silverstein That is the first poem of Shel Silverstein's Everything On It, a book of funny, easy-to read poems about mostly random topics, from a hot dog with everything on it (Hmm, that sounds familiar) to 28 uses for spaghetti.

I particularly loved this book because of the funny poems.  My two favorite poems in this book are "The One who Invented Trick-or-Treat," a poem spoken by a dentist who claims that he invented trick-or-treating to make more money, and "The Lovetobutcants," about a person trying to make up excuses for not having to do any work or chores. Another poem I like, "Growing Down," is about a grumpy old man called Grow-Up Brown who is always telling children to grow up and act more mature. One day, the children suggest to him that he should try growing "down" instead, and act more like a child. So he does it for a while. And what do you think happens?

When Shel Silverstein wrote this book, he too was "growing down." I believe that when he writes poems like these, he feels like a child again. He wants to share that feeling of being young again with his adult and teenage readers. However, this book is appropriate for anyone because it has no rude humor and has no challenging words, making it ideal for younger kids as well as adults. This book can help introduce children to the world of poetry. They probably think poetry is all boring and about love and all that. But that's not (necessarily) the case at all. After reading this book children may ask for more poetry books, or even feel inspired to write their own poems. I can guarantee that anyone who reads this book will love it.

And keep an eye out for his other poetry books, including Where the Sidewalk Ends, Runny Babbit, Falling Up, and A Light in the Attic!

Daddy's afterthoughts:  When I was about Julia's age, or perhaps slightly younger, I saw a stage presentation of dramatized readings of Shel Silverstein poems. I was hooked, so as soon as my kids were old enough to read poetry (and to not destroy expensive hardcover books) I started buying them one Silverstein hardcover per year for the holidays, and still have a few left to go. If your kids like Silverstein, then for sure hunt down Ogden Nash's poetry, or Roald Dahl's Revolting Rhymes, and if you're lucky you'll stumble across a hard-to-find book called O Sliver of Liver by Myra Cohn Livingston. More adventurous young readers of fantastical poetry will thrill to Nancy Willard's Newberry Medal and Caldecott Honor-winning book A Visit to William Blake's Inn: Poems for Innocent and Experienced Travelers.