Running Out of Night, by Sharon Lovejoy 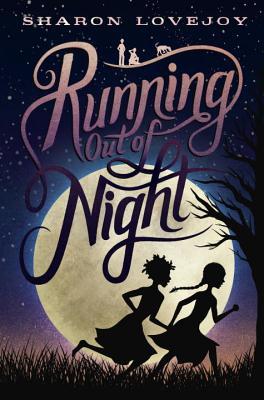 Then one day, something happens that changes her life. A young girl comes to her farm, alone. This new girl has dark skin, very dark skin. This new girl is a runaway slave; she has run from her master and is probably heading for Canada, where she would be free. Her name is Zenobia, and the nameless girl first meets Zenobia when she comes to the doorstep of the nameless girl's cottage.

Zenobia decides to give the nameless girl a name. She hears her whistling and thinks that she sounds just like a bird, so she calls her Lark, after the bird. This is very special for Lark. Receiving a name is like being welcomed into the world; for the first time, Lark feels like she has an identity. Lark is breaking the law to help Zenobia, where almost anyone else (like her father) would turn her in for the reward. The two girls quickly become like sisters, family.

They've been running a few days, and they climb a tree and stay there for the night. Lark and Zenobia are hiding in the tree when they hear Lark's father's voice call out:

"Where's the redhead girl? And where's my runaway slave girl?"

High up in the tree they are able to stay undetected, but the fact that Lark's father is looking for them is something to worry about. He had two hounds, who will find them in no time, except they apparently, thankfully, cannot smell up trees.

Later on, they meet Brightwell, another runaway slave. He runs with them, and in their journey they meet new people, both kind and cruel, encounter trouble and tragedy, and become lifelong friends. Lark's and Zenobia's journey on the Underground Railroad shows that there is so much more to a person than the color of their skin. It shows that the worst of times can bring out the best in people.

Zenobia and Lark stay together throughout their journey. Lark won't let anything separate them, not even the fact that her own father was hunting them down. So while this book is full of tragedy and trouble, there's something else in this story: loyalty to the people you love.

Daddy's afterthoughts:  Julia kind of back-pedaled into it, but yes, this novel is a historical tie-in to the history of the Underground Railroad. This makes it more than just a fictitious lark (no pun intended), but a nice way to introduce the history via an engaging story about two heroic young women, though the history itself (names, places, dates, figures) is low-key and in the background - this does not read like a history textbook! The focus is on the actions and escapades of these two youngsters. The book is narrated in dialect; Lark is the first-person narrator of this book, and the sound of her voice comes though clearly in the altered spellings (-in instead of -ing, for example), word choices, and grammar ("Me and Zenobia set down..."). For some parents, I know this might present a problem, especially for younger readers whose parents might prefer exemplars of more polished "standard" English. But give it a try! Dialogue too is infused with the local color of the time and place, and parents will perhaps be happy to hear that the dreaded and hated "n-word" is not used anywhere in the book - not something you get with Huck Finn and the like. Perfect for grades 4 through 8.
at January 29, 2018 4 comments:

The Outsiders, by S.E. Hinton

This story takes place around the 1960's, when switchblades were legal, kids smoked when they were nine or ten, and Mustang cars and drive-in theaters were popular.

Ponyboy Curtis is a greaser. Greasers get their name from the grease they use to slick their hair back. They're poorer than middle class, smoke a lot, get into trouble from time to time, and get into fights with the Socs.

Socs are the rich, upper-class kids. They drink beer, throw wild parties, and drive fancy cars like Mustangs (yes, back then a Mustang was a fancy car). But for some Socs, a favorite activity was to jump greasers. When I say "jump," I don't mean playing leapfrog. I mean four or five kids pile into a car, find someone else from the other side of town, and beat them up.

Ponyboy, a 14-year-old boy, is walking home from a drive-in theater when he gets jumped. The Socs who jump him only run away when they hear Ponyboy's brothers come running. Ponyboy has two brothers: Sodapop and Darry. Sodapop is 16-going-on-17 and has a great sense of humor. He dropped out of high school to get a job. Darry is around 17 or 18 and works roofing houses, so he has big muscles and is really athletic. Life is tough at home for Ponyboy; he constantly gets into fights with Darry, when Darry is home. Darry and Sodapop both work full-time jobs to support the family.

One evening, Ponyboy and his friend Johnny go to a movie at one of those drive-in theaters, and end up sitting next to two Soc girls, Cherry and Marcia. When the movie ends, Ponyboy and Johnny offer to walk the girls home. While they are walking, a blue Mustang pulls up beside them, and two Soc guys get out. These two guys just happen to be Cherry and Marcia’s boyfriends, and these guys are mad at the two greasers for "picking up" their girls.

Cherry and Marcia decide to head home with their boyfriends before a fight breaks out, leaving Ponyboy and Johnny standing there. They walk back to the lot of the drive-in, lie down in the grass, and chat for a bit. They fall asleep. When they wake up, it is two in the morning, and when Ponyboy gets home, he gets into a fight with Darry over his being out so late. Darry hits him in anger, which no one in Ponyboy's family has ever done. Ponyboy runs away, finds his friend Johnny, and together they run to the park. There, they get jumped by the same Socs who came up next to them in the lot of the drive-in.

The Socs try to drown Ponyboy in the park fountain, but when Johnny stabs one Soc with a switchblade, the rest of them go running. Johnny has killed someone, and that "someone" turns out to be Cherry's boyfriend.

The boys they run for it. Soon the cops will be after them.

The Outsiders is "a heroic story of friendship and belonging," and a true classic. (And the author was 15-16 when she wrote it!) Ponyboy lives in a world where society defines you as a good or bad person according to things like how much money you have, what type of car you drive, if you even have a car, etc. Society expects everyone to be like a Soc, rich and sophisticated. If you aren't, then you are branded a greaser, and everyone shuns you. And simply because Ponyboy is a greaser, society sees him as a criminal, though he's not. He's an intelligent young man who is kind to others. But in his world, money and cars are valued over kindness, intelligence, and love.

This book gives us a strong example of how other people's views affect you, and everyone around you. The Socs jump Ponyboy and Johnny because they are greasers, but there are moments in the story when some of the Greasers and some of the Socs try to talk and get to know each other a bit, understand each other.

Still, that happens too late to save more than one life…

Daddy's afterthoughts:  So, originally the idea was not to have Julia do so-called "classics," books that everybody has read (recent mega-sellers like Harry Potter or Hunger Games, and/or acknowledged classics like Charlotte's Web, The Hobbit, or the Narnia books) or has to read (Of Mice and Men, Huck Finn...). And in fact, I suspect, many American kids will have to read this book in grades 7, 8, or 9. However, in the case of The Outsiders, a true modern classic, I think the two things that tipped the scales for me were as follows:

a.) The book is loaded with wonderful anachronisms that are far more alien to today's 10-15 year-olds than they were to the same age group in my day. Talk of switchblades and rumbles and Ford Mustangs and drive-in movie theaters evoke for me a quaint Grease-like atmosphere. But I wonder if for kids today, this might be little different than reading Shakespeare - words and phrases and places and references for which they have little context. In that sense, The Outsiders is a period piece, unique in that it takes place in a period about which the parents of the child reader can actually say, "Yeah, I remember that. I was there, let me tell you about it."

b.) The book has been frequently banned or challenged in school districts all over the country. No, really. It is apparently in the banned books all-time top-50. Insane, IMO. Still, if you decide that your child isn't ready for The Outsiders, I can strongly recommend Trino's Choice, by Diana Gonzales Bertrand. It has a similar storyline and theme(s), and features a 7th-grade protagonist that many kids will associate with. Slightly shorter, and targeting a younger audience, the book is equally as literary, and significantly less violent, while focusing a little more on positive role models (a chief criticism of The Outsiders).
at January 20, 2018 2 comments: