The War that Saved My Life, by Kimberly Brubaker Bradley 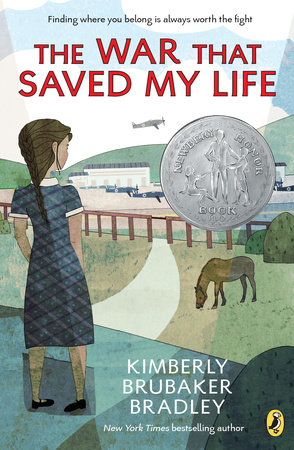 Ada has never left her apartment in London all her life. Her mother is so ashamed of Ada's crippled right foot that she won't even let her go outside. Not that Ada can go anywhere, her foot makes it too painful to walk or even put weight on it. Ada spends her days in the little one room apartment just sitting around. Messing up or talking back, or even daring to leave, results in a beating, being slapped, or spending the night in the cabinet, a filthy cupboard inhabited by roaches.
A war is going on, World War II to be exact. Ada's mom is going to send Ada's younger brother Jamie away from the war to protect him, and leave Ada in the apartment, but Ada sneaks away with Jamie.
Ada and Jamie go with all the other children who are being evacuated. People from the country take the children into their homes and provide them with food and shelter. Ada and Jamie go with a Miss Susan Smith, which is funny because Ada's last name is Smith to begin with. Miss Smith immediately notices Ada limping when she walks (Ada taught herself to walk, she mostly crawled around before) and takes her to see a doctor. Turns out, Ada's foot is crippled from a condition called clubfoot, which is common and can be surgically fixed. One big problem: they have to get Ada's mother's permission. Miss Smith sends letters, which receive no reply. So either Ada's mom can't read, or she isn't bothering to read the letters.
Ada is left with a whirlwind of thoughts. She is constantly thinking about the war, her "new" life, and the family she left back home in London. The only thing that seems to calm them is when she lets her mind wander, or when she is out riding Butter, Miss Smith's pony. When Ada isn't thinking, her head is clear, but when she tries to think, she just gets confused.
Ada doesn't want to get "used to" Miss Smith, nor does she want to go home. Miss Smith won’t beat or slap Ada and Jamie, even when they might deserve it. With Miss Smith, she feels more free. But she knows she can't have it both ways.
This story is yet another WWII story about a young girl caught in a difficult situation, but unlike my other reviews (Making Bombs for Hitler and The Devil's Arithmetic), there are no scenes with Nazis in this book. Ada hears about the bombs and the news of the war only on the radio. Instead, this book focuses on Ada's conflict: Ada doesn’t know where she belongs. Is it her mother's London apartment, or Miss Smith’s country home?
The blurb on the cover says "Finding where you belong is always worth the fight." Well, maybe Ada has found where she belongs, all she needs to do is just know it.

Daddy's afterthoughts: This 2015 release is a 2016 Newberry Honor book. It is a book that is set during the war, but it is really not a "war" book, in the historical fiction sense of some of Julia's other reviewed books. It might be more accurate to say that the war outside is just a metaphor for the war in her family, or the war in her heart over her sense of loyalty between one Smith (her mother) and the other Smith (her caretaker). There is some war detail in the book; Ada narrates historical events as they happen, in parallel with her own story. The distance the book puts Ada at from the actual battlefront makes her more of a spectator, a reporter, and allows her to keep at least some of her innocence. She is worried, but she is not in the thick of it.

There is something very Pete's Dragon or Harry Potter about the arc of this story - going from a household where there was little love, to an ad hoc adoptive family who is able to make a connection and possibly, as the title suggests, "save a life." Commonsense Media gives it very high marks for Educational Value, Positive Role Models, and Positive Messages, and while it rates mid-high in the Violence category, this book is potentially far less intense for most readers than a lot of YA WWII fiction with a Holocaust theme.
This book does have a sequel, The War I Finally Won.

The Devil's Arithmetic, by Jane Yolen 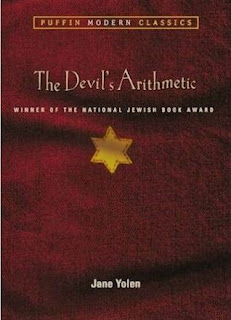 Hannah is completely sick of family gatherings and reunions. The only things that her family talks about are the past, the past, and the past. It already happened, so why talk about it?

Hannah and her family are Jewish, and her family is celebrating the Passover Seder when Hannah is asked to open the door for the Prophet Elijah. Hannah opens the door that should lead to the hallway outside the apartment they were celebrating in, but instead of a hallway there is a grassy green field, and when Hannah turns around the fancy feast is gone. Her family has disappeared too. In their place stands a small polished table with few things on it. Opening the door has transported Hannah to a new place. Where is she? And when?

A woman's voice behind her says "Well? Is he coming?" Hannah turns around, confused, until the voice asks "So, Chaya, is Shmuel coming or not?" Chaya is Hannah's Hebrew name.

Hannah is surely dreaming, she thinks. It must be the wine, Hannah thinks. It's giving me daydreams. Or possibly her family is playing some trick or prank on her. She decides to play along: "Whether it was a dream or an elaborate game, she'd show them all that she's a good sport" (24).

Hannah meets many different people: Gitl, the woman who spoke to her; Shmuel, Gitl's younger brother who is getting married the next day; Fayge, Shmuel's wife-to-be; Yitzchak, a butcher; Yitzchak's two kids, Reuven and Tzipporah; and four girls that are her age, Rachel, Shifre, Esther, and Yente. Hannah quickly becomes friends with these girls. They all call her Chaya.
Chaya Abramowicz. But Hannah's last name is Stern...

Then Hannah sees herself in a mirror:

"Gone were her braces. Gone was the light coral lipstick her mother had allowed her to wear to the Seder. The girl who stared back had the same heart-shaped face, the same slightly crooked smile, the same brown hair, the same gray eyes as Hannah Stern of New Rochelle, New York, in America. But there was something old-fashioned and unfamiliar about this Chaya Abramowicz, something haunting..." (44).


The wedding procession for Shmuel and Fayge is full of lots of music, singing, and dancing, but as they arrive at the synagogue, they see that there are military trucks parked in front of it. These trucks belonged to Nazis. Now Hannah finally realizes what is going on. She had been transported back to 1942, in the middle of the Holocaust, and she is a Jew. Someone else, but still a Jew.

The Devil's Arithmetic is shorter than 200 pages, yet in that small space it explains about what life was like for many Jews during WWII. The concentration camps, the gas chambers, the ovens. The brutal Nazi guards. This is especially hard for Hannah, who meets an elderly family member (in Hannah's time) as a young girl (in Chaya's time) in the camps, and has to make a difficult choice. I'd say this book is almost more like historical fiction/horror than just historical fiction. If you are a parent, please read this before giving it to your kids. And be happy that opening a door won't transport you to the middle of a war.

Daddy's Afterthoughts: I am delighted that Julia is starting to read multiple books on the same theme. This book couples well with Making Bombs for Hitler, as she already mentioned, in terms of their historical time period/milieu, etc... But it also uses the "young person who is transported to another time/place to learn an important lesson" trope that defined her recent reviews of The Lost Track of Time and The Phantom Tollbooth. As a former secondary school English teacher (I taught grades 7 and 9-11 for fifteen or so years, before switching to college teaching), I was always keen to get my students to recognize connections between texts, or between texts and life, or both. I'm glad that she is doing this on her own. One of the advantages of reading a lot is that students get to experience this, instead of simply being told by a teacher in a class somewhere that the connections exist out there. So that's my lecture for the day.

This book is an emotional read. (There is a twist at the end of the novel - I won't give it away, but since Julia did not really tease it, I will - that is the payoff for the whole book, and it will bring tears to the eyes of any sympathetic reader, as well as a stunned "Wow.") Other than the high drama/tragedy factor, there are a lot of Hebrew and/or Yiddish terms and names that pepper the text that non-Jewish readers will not be familiar with, nor perhaps even be able to pronounce. Other authors in similar situations have been kind enough to provide glossaries of unfamiliar or novel terms, or at least pronunciation guides (see Burgess's A Clockwork Orange - a book that is definitely NOT NOT NOT for kids - or Frank Herbert's Dune for examples). Jane Yolen did not, at least in the version we read. So there may be a bit of a learning curve. But that's okay. A lot of learning can come from this book.