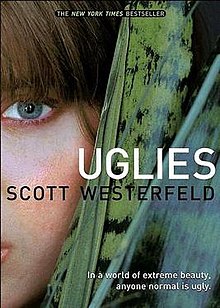 Imagine it. You are 15. In two weeks you will be 16. You can hardly wait. Because turning 16 brings a life-changing operation. This operation turns you from an ugly to a pretty. You're probably thinking: "That's ridiculous!" But it's true. In this world, everyone anticipates this operation that makes them gorgeous.

Tally lives in a post-apocalyptic world. Before the operation, life was like we know it today. People went to war, we used oil, we cut down trees, there was pollution, etc. And then someone invented a bacterium that, when it came into contact with petroleum and oxygen at the same time, exploded. The explosion sent spores flying in every direction, spreading it. This "oil bug" spread across the world, infecting everything. The human population was devastated. The survivors eventually started rebuilding cities, repairing the damage done before the oil bug, and inventing new things... like the pretty operation.

Now back to the present. Tally has just snuck in to New Pretty Town and is about to leave when she meets Shay. Shay is a girl Tally's age who hasn't had the operation yet, and she doesn't plan to. Shay tells Tally about a place far away from any of the cities, where people live without the operation. This place is called the Smoke, and those who live in it are called Smokies. Shay plans to leave Uglyville for the Smoke. She plans to stay "ugly," to live a life of hard work. She wants Tally to come with her, but Tally refuses; she thinks it will be better to have the easier life that comes after getting the operation. Shay gives Tally directions to the Smoke, just in case she changes her mind. They exchange good-byes, and Shay leaves.

The day of Tally's operation comes, but when Tally arrives at the hospital, a man walks up and says, "There's been a problem with your operation. Come with me."

This man is a pretty, but unlike any pretty Tally has seen before. Unlike most pretties, who give off a warm, friendly feeling, this pretty emits a cold, hard feeling.

Tally follows the man into the hospital. There she meets Dr. Cable, another "cruel pretty." Dr. Cable talks to Tally about Shay, and how Special Circumstances, the government organization that performs the Pretty operation, has been monitoring her. Dr. Cable then gives Tally a choice: Go to the Smoke and turn Shay in, or never become a pretty. At first she does not want to, but the thought of being "ugly" all her life overwhelms her, and she decides to go.

The truth is not always so pretty.

Uglies is a lot like Delirium; click on the link to read my review of that book! At a certain age everyone is required to get an operation to change them into what they believe are better people, into what the society says people should be more like. They are forced to change themselves permanently to fit in. The main characters in both books are okay with the operation at first, because they believe the easier life will make them happier, but both girls end up second-guessing their way of thinking due to the influence of other (wiser) characters. Lena, in Delirium, ends up changing her mind. But will Tally change her mind, even knowing the truth about the pretty operation? Or will she turn her new friend Shay in, so she can become pretty like she has always wanted?

The people in Uglies think that being beautiful solves everything. But, it doesn't. It doesn't matter what you are like on the outside. And why are people who haven't had the operation called "uglies," anyway? Well, it's because...

"In a world of extreme beauty, everyone normal is ugly."

--------------
Daddy's Afterthoughts:  I'm a sucker for a good, post-apocalyptic dystopian novel. This, the first book of a trilogy (actually a "trilogy-plus-one"), was recommended to Julia by an English professor friend of mine. She read it as an adult and loved it, and she passed her copy on to Julia. So if that is any indication, this piece of YA fiction is suitable for tweens, teens, and full blown grown-ups. I can't help but feel that the subject matter seemed a bit Cosmo for Teens at first, but the reviews I have read suggest that it is not only a good piece of dystopian YA fiction, but is a satisfying and rave-reviewed book for SF fans of any stripe, old or young. That's pretty high praise. Kirkus rates the book highly, and recommends it for ages 14+, but Julia gobbled the book up at 12.