Nothing but the Truth, by Avi 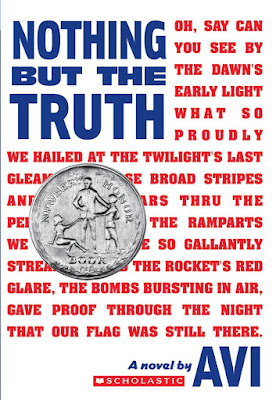 Ninth-grader Philip Malloy thinks about one thing: track. His ambition to be in the Olympics keeps him running (geddit?). And his love for running brings on a chain of events that is different from what he first imagined.

Philip hates English class (and homeroom). He hates his English (and homeroom) teacher, Miss Narwin, because she can't take a joke. And when the winter term exams roll around, she gives him a D on the report card due to his disrespectful, mocking answers on the exam, as well for his lazy work in class.

That one D changes everything.

A few days later, Philip tries to sign up to join the track team, but is denied because of his grades: his English grade, to be specific. The rule is that to join a sports team, you have to have a passing grade in every class, and a D is not considered a passing grade. Philip, outraged by the act that he can't join the team, searches for a way to get transferred out of her classes. He finds a way very quickly.

Every day, in Philip's high school, Harrison High, during homeroom, a tape of "The Star-Spangled Banner" is played on the sound system. Every morning, just before the tape is played, the principal, Dr. Doane, says "Please all rise and stand at respectful, silent attention for the playing of our national anthem."

On Wednesday, March 28, during the playing of the tape, Philip starts to hum along. Not loud, just to himself. Miss Narwin yells at him to stop, so he does. For two more days, he does the same thing -- he hums along with the tape -- and he gets suspended from school for two days for not following school policy of standing for the anthem in "respectful silence."

The next day, an article appears in the newspaper, in the school section. The title reads "Suspended for Patriotism."

Over the course of a few days, the story is spread all over the country, on the news, in the papers, and on the radio. It seems that the whole nation wants to hear about the kid whose teacher suspended him for his sense of patriotism. Letters and telegrams arrive for both Miss Narwin and Philip, from all over. Miss Narwin receives hate-mail, while Philip receives letters of support.

But somewhere along the line, the story has gotten twisted. What is the truth, and what are the lies?

Nothing But The Truth is a fantastic story about the multiple sides to one event. Philip tells his side of the story first, so whoever wasn't a witness to the event believes him. People believe what they're told, and have an irritating habit of not checking the facts before they spread a story. After a while, the spreading of his version of the story has consequences he does not intend.

Perhaps what is the most unique part of Avi's novel is the style of the writing. Much of it is formatted like the script for a play. Plus, there are images of memos, newspaper articles, discussions, diary inserts, and letters mixed in. This "documentary novel" is different -- it's not just paragraphs put together into chapters like most novels --  but is great for ages 11+. There is no profanity, aside from one use of the "b" word.

Does it sound intriguing to you? If so, go ahead and read it. But before you do, one question:

"Do you swear to tell the truth, the whole truth, and nothing but the truth?"


-----------------------------------
Daddy's afterthoughts:  This is an amazing non-traditional novel. Actually, for kids who have cut their teeth on books like the Diary of a Wimpy Kid series, where the text is a melange of prose, snippets and excerpts of documents, drawings, etc... this particular way of cobbling together 150 or so pages of text should not at all be disorienting. What Avi calls a "documentary novel" is really a version of an epistolary novel, and there are a lot of other contemporary examples for tween and teen readers. What I love most about this book, more than the way the consequences of Philip's actions and choices snowball, is the final dozen of so words of the novel. I won't spoil them, so don't be tempted to read the last page first (as some are wont to do), but save the last few sentences for the impact they will certainly have.