I Am Princess X, by Cherie Priest 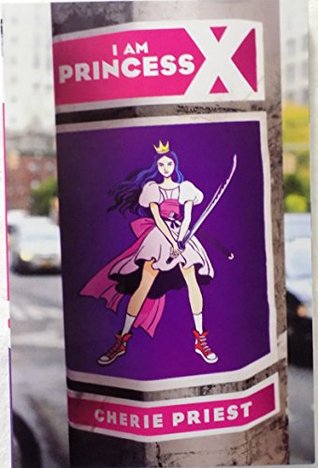 Libby and May have been friends since the fifth grade. Libby is a great artist. May is a good writer, but she can't draw for crap. She says so herself.

Their friendship isn't the only thing that started in the fifth grade. Princess X started there too. She wears a pink dress, red Chucks, a crown, and carries a katana. She lives on a hill, in a haunted house, and has ghosts as friends. She started as a sidewalk drawing, and eventually morphed into a full-fledged character. Libby and May have written and drawn hundreds of Princess X comics.

And then, one night, Libby's mother is in a car, driving over a bridge, with a rushing river underneath. Libby is with her. The car goes over the side, into the water, and Libby dies.

Three years pass, and now May is sixteen, lonely, filled with longing for her friend, and haunted by dreams that say that Libby didn't die that night, that she broke free, and swam to the surface. But May doesn't believe herself.

Until she sees the sticker on the window of a building about to be demolished.

Is it possible? Can it be? The sticker is Princess X! But how? Libby is dead... isn't she?

Princess X stickers, Princess X patches, and Princess X graffiti art start popping up everywhere. But the most intriguing of all is a webcomic on a website called www.iamprincessx.com. May starts to see more and more connections between the webcomic and Libby's "death."

Because Libby is alive. What May's dreams have been telling her is true. Well, maybe.

I Am Princess X shows just how far a friendship can go. May doesn't give up on Libby when everyone else thinks her dead. May struggles to prove that Libby is alive. Throughout the story, May collects clues and makes shocking discoveries, all in an effort to solve the mystery of Libby's disappearance. And May shows us one thing: When the world tells you to give up, to quit trying, don't.

I first read this book when I was around 10, and I loved it. I read it over and over. I just pulled it off the shelf after a year or two, and it definitely is for a slightly younger reader, ages 9-11, maybe 12. I still liked it, but I have moved on to more grown-up books. Still, it was fin to re-read. The book is definitely "cool" - the artwork is cool, two of the characters are hackers, and this will appeal to a lot of readers. Just read it before you outgrow it!
-----------------------
Daddy's afterthoughts: This was Julia's favorite book for a good six months after I bought it for her (that's a long time, for her...) when she was 10 or 11. Everything from the colors of the artwork, the strange fusion of novel and graphic novel styles, to the hacker-chic aesthetic, to the quirky style of Princess X's getup and X's super-cool Powerpuff Girls-esque bravado and stance simply screamed "high-interest." I wonder if the title will scare away male readers; if so, it should not. Boy or girl, whether your bag is anime, superheroes, or cartoons of the Powerpuff Girls' extended universe variety (Powerpuff Girls, Dexter's Laboratory, Samurai Jack) and the like, this book will be a hit. Yes, it almost certainly was written to target tween girls (say 10-12-ish), but that should not stop anyone who likes this kind of storytelling.
at April 30, 2018